An early alarm at 05:30 allowed us to get breakfast, sorted out and walk to the station to catch the 07:56 train to Leeds.

A forty-minute walk from the station and we were at the Marsden Monument, starting point of The Dales Way link route.

Obligatory photos taken, we were off, initially walking along dismal victorian terraces, but soon dropping onto tree-lined path that lead all the way out of Leeds.

Despite our guidebook's best attempt to convince us otherwise, we were were never tempted to think that this was as good as being in the countryside.  Granted,it was a pleasant surprise to have such an extensive green corridor to follow, but the presence of graffiti, litter and dog excrement was a constant reminder that we were still in close proximity to a large urban population.

Once we had passed Headingley Golf Course we were really into the countryside proper - initially open fields, then woodland. It felt so good to be back 'on the trail', but unfortunately it didn't last as we hit the exclusive dormer town of Bramhope.   This was a bit of a slog in the heat - several miles of tarmac footpath winding between lots of quite grand houses with flash cars parked on the drives and often hurtling past at high speed.

Saving grace for Bramhope was The Fox and Hounds where we stopped off for orange juice and lemonades with lots of ice.  The heat of the sun had been roasting us all day, and a long, cold drink was just the job!

Soon after Bramhope we were making good progress through Danefield and Chevin Forest Parks on broad, flat sandy tracks.  Shade provided by the trees was very welcome, but it was still very hot. Despite meeting lots of people walking toward us eating icecream, we were disappointed to find there was no van in the car park.

Beyond the forest we climbed steadily up to a gritstone ridge, The Chevin, with wonderful views over Otley and beyond. Better still.  Right on top, by the topograph ... joy-of-joys ... an icecream van!   In this heat it was a lifesaver (if not literally, then at least metaphorically).

We finally arrived at Chevin End Farm just after 5 o'clock.   As advised by our landlady, we dropped our kit off and immediately headed back to the pub (a hundred metres up the drive) for a swift drink and to book a table for our evening meal.  Mission accomplished, we had about an hour to shower and change before returning for dinner.

Food at The Chevin was excellent.  Carolyn had fish pie, and I had my all-time-favourite long distance dish - bangers and mash.  Washed down with a couple of beers, it was the perfect end to a long, hot day.

Carolyn at the official start of the Leeds link - the H R Marsden monument, Hyde Park ...

Bridge over the beck,  Meanwood Park

Passing under the Leeds ringroad

Party of Ramblers, near Eccup Reservoir 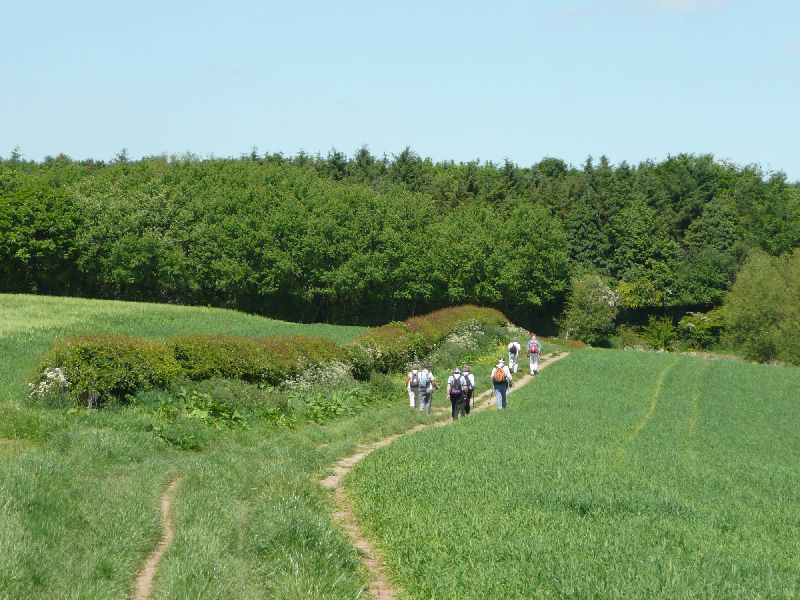 A distant Wharfedale Viaduct (the first of many) from The Bowshaws

The Fox and Hounds, Bramhope

Expansive views over Otley from The Chevin